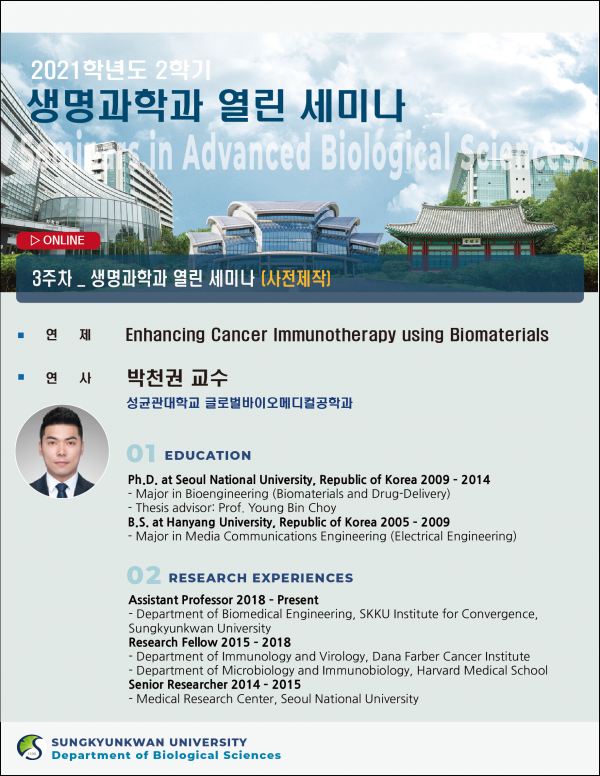 Chun Gwon Park is an Assistant Professor in the Department of Biomedical Engineering at Sungkyunkwan University, Korea. He received his B.S. (2009) from Hanyang University and his Ph.D. (2014) from Seoul National University under the supervision of Prof. Young Bin Choy in the Department of Biomedical Engineering. Then, Dr. Park worked as a research fellow at Harvard Medical School and Dana-Farber Cancer Institute, where he focused on biomaterials-based cancer immunotherapy until he became a faculty member at Sungkyunkwan University in 2018. His research is mainly focused on developing innovative biomaterials-based drug delivery approaches to increase the efficacy and decrease the toxicity of clinically available therapies including cancer immunotherapy. Dr. Park has published > 50 peer-reviewed research papers including Science Translational Medicine, Nature Communications, Science, Advanced Science and Biomaterials. Dr. Park was awarded domestically- or/and internationally-recognized Awards including Outstanding Young Scientist Award from the Korean Society for Biomaterials, Korea (2021).

Unlike traditional approaches in oncology, cancer immunotherapy harnesses a patient’s coordinated and adaptive immune system in order to combat the disease. Recent clinical data have supported the utility of this therapeutic modality. The benefits of cancer immunotherapy include the potential 1) to treat all types of cancer, regardless of the underlying mutations or cell of origin; 2) to prevent metastasis and relapse by generating memory antitumor immunity; and 3) to decrease side effects relative to conventional cytotoxic treatment approaches (e.g., chemotherapy and radiotherapy). Still, the therapeutic index of cancer immunotherapy must be improved, since the proportion of patients responding to this approach remains unsatisfactory and the therapy often causes systemic toxicity following parental administration. To address these issues, we used various biomaterials-based drug delivery approaches to deliver immunomodulatory compounds in a spatiotemporally controlled manner in order to improve their efficacy and safety relative to conventional systemic administration.
In one example, we designed and prepared a hydrogel loaded with a combination of immunomodulatory drugs. We showed that a majority of mice were cured after administration of the hydrogel, which sustained the release of the immunotherapy. In contrast, most mice succumbed to tumor recurrence and metastasis following systemic or local administration of the same therapeutic combination in solution. In a second example, we developed antibody-targeted nanoparticles to target the delivery of immunomodulatory small molecules to specific endogenous immune cell subsets, including PD-1-expressing cells, in order to improve the efficacy and safety of the drug. We showed that the nanoparticles could specifically bind to the targeted cells in blood as well as tumors. Targeted delivery of the drug delayed tumor growth and extended the survival of tumor-bearing mice.
Our findings suggest that properly designed biomaterials and drug delivery technologies are useful tools to ensure sustained and/or targeted delivery of immunomodulatory compounds. Spatiotemporal control of drug release can harness the full potential of cancer immunotherapy, improving its efficacy while minimizing its toxicity by concentrating the action of such compounds on the relevant cells.