Annexins are a superfamily of proteins that are expressed in the majority of mammalian cells as well as molds and plants. A notable characteristic of all the members is that they bind to phospholipids in a Ca2+-dependent manner. Various annexins play a regulatory role in the exocytosis of secretory vesicles in adrenal chromaffin cells, anterior pituitary cells, and pancreatic ß-cells. In these cells, intracellulaf annexins play a role in the regulation of exocysis of secretory vesicles. However, the regulatory mechanisms of intracellular annexin I on the secretory machinery have yet to be fully explained.

The phopholipase A2 (PLA2, phosphatide 2-acylhydrolase, EC 3.1.1.4) is a superfamily of distinct enzymes that catalyze specifically the hydrolysis of the sn-2 eter bond of phospholipids to yield free fatty acids and lysophospholipids. PLA2 enzymes have been implicated to play a role in various cellular processes and responses such as phospholipid digestion and metabolism, membrane remoldelling, host defense, differentiation, mitogenesis,exocytosis, and cytotoxicity.

We currently investigate the regulatory mechanisms of annexins and phospholipase A2 on the insulin secretion in pancreatic islets and insulimona cells to gain an insight into its mode of action. 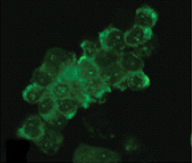 Binding of annexin l to the surface of islet cells