My research interests are focused on understanding the biodiversity, phylogeny, and genome evolution of photosynthetic eukaryotes. In particular, we are interested in plastid evolution of the red algae and red algal plastid descendants (e.g., chromalveolate algae including the cryptophytes, haptophytes, stramenopiles, dinoflagellates, apicomplexa and ciliates). We also study Paulinella, which has recently acquired its plastid from a Synechococcus-like cyanobacterium. With this system we have the rare opportunity to study some of the earliest steps in plastid establishment. To do so, we use comparative genomics, phylogenomics, and morphological data of both photosynthetic and heterotrophic Paulinella species. We recently developed the single cell genome sequencing from individual cells of protists. Single cell genomics approach opens novel opportunities to study protist, prokaryote, and viral interactions in situ, without cultivation artifacts. This powerful method could be employed in diverse research area to address fundamental biological questions.

Origin of Plastids and Evolutionary Timeline
Photosynthetic eukaryotes (algae and plants) play an important role as primary producers that form the base of the food chain for life on earth. However, in the Eukaryotic Tree of Life, photosynthetic lineages are not monophyletic but positioned in four supergroups that suggest complicated evolutionary histories for the origin of plastids. It is well known that the first eukaryotic photosynthesis started from a primary endosymbiosis event between an ancestral heterotrophic protist and a captured cyanobacterium that gave rise to the glaucophytes, red algae and Viridiplantae (green algae and land plants). These primary plastids were then transferred to other eukaryotic groups through secondary endosymbiosis. 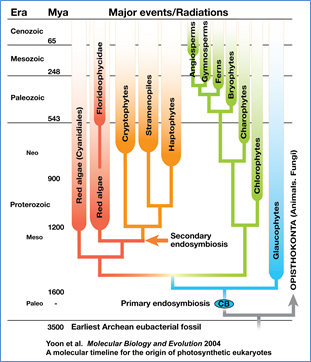 A red alga was captured by the ancestor(s) of the stramenopiles, alveolates (dinoflagellates, apicomplexa, chromeridae), cryptophytes and haptophytes, whereas green algae were captured independently by the common ancestors of the euglenophytes and chlorarachniophytes. We are working on the origin of plastids, especially of the red algae and red algal descendants. We also estimated evolutionary timeline for the primary endosymbiosis as ca. 1500 MYA, and 1300 MYA for the secondary endosymbiosis using molecular clock method (see above figure from Yoon et al. 2004).
Red Algal Tree of Life (RedToL)
The red algae (Rhodophyta) form a distinct photosynthetic eukaryotic lineage that consists of around 6,400 species including unicellular to large multicellular taxa. The red algae are unique among eukaryotes in lacking both flagella and centrioles. Pit connections, pit plugs, and a triphasic life cycle are mostly found in the Florideophyceae. Plastid is bounded by two membranes and contains chlorophyll-a, phycocyanin, and phycoerythrin as photosynthetic pigments. These pigment complexes, organized in phycobilisomes, are located on the surface of unstacked thylakoid membranes to capture light energy. As a storage product, the red algae produce granulated floridean starch in the cytoplasm. In addition to these unique features, the monophyly of red algae is strongly supported by nuclear, plastid, and mitochondrial gene trees. In 2006, we analyzed multigene and suggested revised seven-class system with two newly established classes (Stylonematophyceae, Compsopogonophyceae) (Yoon et al. 2006). To enhance our understanding of red algal biology, we started the RedToL team includes the most prominent active national and international red algal specialists from different generations who use different methods.
(RedToL website, http://dblab.rutgers.edu/redtol/home.php). 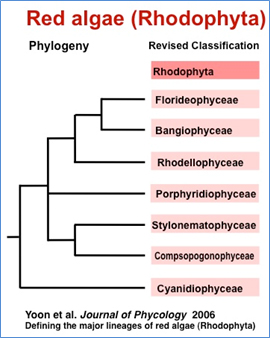 As the Lead PI from eight international institutions, my lab is responsible for: 1) coordinating activities of RedToL, 2) providing a broad taxonomic expertise about six classes of non-florideophycean red algae, 3) generating 16 complete plastid and mitochondrial genome sequences, and 4) doing the wet lab work to support sequencing of 16 transcriptomes from red algae. Currently we are completing ca. 30 red algal organellear genomes with draft genome data using our own Ion Torrent PGM machine. Several exciting papers have been published as below, and many will be coming soon.
Heterokont Tree of Life
The Heterokontophyta (= stramenopiles) is a monophyletic group of eukaryotes that possess tripartite hairs along one flagellum. Twenty-one classes are recognized including five nonphotosynthetic groups. The heterokonts comprise more than 100,000 species including very diverse life forms from single cells tolarge plasmodia to complex multicellular thalli. The best known members of the group are the colorless oomycetes (aquatic ‘fungi’), diatoms, chrysophyte algae, and giant kelp seaweeds. Photosynthetic heterokont algae are the predominant eukaryotes in most aquatic environments, and they play an important role in ecosystems as major primary producers. Molecular data had consistently recovered monophyletic classes for the heterokont algae, however, the relationships among the classes had remained only partially resolved. To address phylogenetic relationships of the heterokont algae, our lab has been collaborated with Dr. Robert A. Anderson, the most prominent heterokont specialist. We analyzed multigene data (e.g., a five-gene data in Yang et al. 2012) from 89 taxa representing all 16 heterokont classes to infer a phylogenetic tree. We found three major clades. 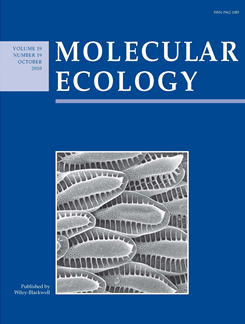 The Aurearenophyceae, Chrysomerophyceae, Phaeophyceae, Phaeothamniophyceae, Raphidophyceae, Schizocladiophyceae and Xanthophyceae formed the SI clade. The Chrysophyceae, Eustigmatophyceae, Pinguiophyceae, Synchromophyceae and Synurophyceae formed the SII clade. The Bacillariophyceae, Bolidophyceae, Dictyochophyceae and Pelagophyceae formed the SIII clade. We are currently updating the analysis with seven-gene data from 130 taxa (Graf et al. in preparation). We have started genome sequencing from several taxonomically, economically, and biochemically important taxa with hoping to address evolutionary history of the heterokont algae.
Paulinella project
The origin of photosynthesis in eukaryotes stems from a single primary endosymbiosis between a heterotrophic protist cell and a cyanobacterium that occurred more than 1.5 billion years ago. Primary endosymbiosis is therefore a critical feature of eukaryotic evolution; however, it is difficult to study because of the long evolutionary time span that has passed since primary plastid origin. The filose amoeba Paulinella chromatophora is an exceptional species that contains two plastids, referred to as “chromatophores,” that originated from a Synechococcus-like cyanobacterium. Photosynthetic Paulinella provides an ideal model to gain insights into the origin of photoautotrophy because its nine sister species are all heterotrophs that prey on cyanobacteria. Since 2006, we studied Paulinella using genomics approaches for the biodiversity surveys and plastid and nuclear genome data. Draft genome data from heterotrophic Paulinella using the single-cell genomics approach demonstrate two cases of horizontal gene transfer (HGT) from cyanobacteria, demonstrating that prey items are potential sources of foreign DNA in these taxa. Genome data from photosynthetic Paulinella provide evidence of massive gene loss from the chromatophore genome, endosymbiotic gene transfer (EGT) to the host nucleus, and the potential establishment of a plastid protein import system that relies on the secretory pathway in the amoeba. We also present recent data regarding postendosymbiotic speciation in photosynthetic Paulinella and lineage specific differential gene loss and EGT. 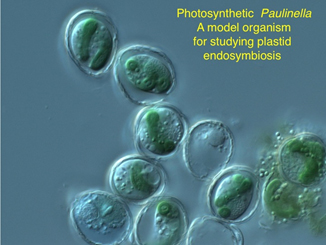 This ongoing genomic study (supported by the Next-Generation BioGreen21 program, RDA, Korea) is focusing on the genomic adaptation that responded on the initial step of plastid establishment that eventually use to understand major primary endosymbiosis that gave rise to the glaucophytes, red and green algal lineages.
Single Cell Genomics
Single Cell Genomics (SCG) is a cutting-edge method that has recently been gaining wide popularity. This approach comprises two steps. The first is to isolate individual cells using fluorescence-activated cell sorting (FACS), which can be used to isolate specific cellular groups based on their size and pigment content, and the second step is to amplify whole genomes for NGS. Using the Bigelow Laboratory Single Cell Genomics Center (SCGC, https://scgc.bigelow.org/), we firstly reported the in-depth single-cell genome of a eukaryote (Yoon et al. 2011). We provided genomic information from three wild-caught cells of uncultivated small eukaryotes, the picobiliphytes that were identified microscopically by Not et al. (2007) using 18S rRNA gene-based FISH. From a total 270 Mbp of draft-genome data (90 Mbp from each cell), they identified not only nuclear genome of picobiliphytes but also a significant fraction of DNA sequences that were related to viruses, phages, Bacteroidetes and Proteobacteria, which are likely to be protist food sources. Another example of eukaryotic single-cell genomics study is for the heterotrophic Paulinella ovalis (Bhattacharya et al., 2012). Paulinella ovalis ingests cyanobacteria in food vacuoles (Johnson et al., 1988) that clearly differ from photoautotrophic Paulinella chromatophora. Using single-cell genomic methods, six genomes of Paulinella ovalis-like cells were sequenced using 454 and Illumina GAIIx platforms. 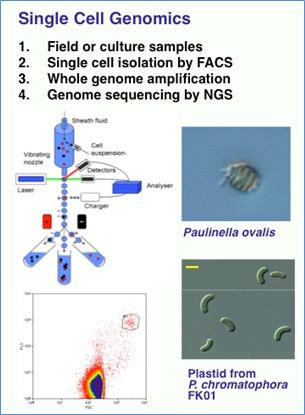 From this study, two cyanobacterial-derived HGT were identified (i.e. DAP epimerase and leucyl-tRNA synthetase) in the nuclear DNA with two flanking genes of eukaryotic origin. These results provide a possible scenario for the acquisition of a primary plastid by phagotrophic Paulinella cells that feed on cyanobacterial prey. The single-cell genomics approach not only opens up the new field of single-cell metagenomics to understand microbial eukaryote–environment interactions and feeding behavior but also provides comprehensive datasets required to understand the initial stage of endosymbiosis with E/HGT in nature and to reconstruct an informed Eukaryotic Tree of Life. Metagenomic approaches using NGS are one way to increase our knowledge about these little-known groups. Moreover, this approach cannot only be used to study photosynthetic eukaryotic algal biodiversity in general, but also allows the characterization of the environmental distribution of eukaryotic algae as a means to characterize specific biotopes.